Developers propose new resort and spa for the Kirkwood area

Late last fall, we learned that Tallac Hospitality is proposing to build a new 65-room hotel, restaurant, and spa; along with 40 “glamping” cabins and an outdoor event center on the north side of Highway 88 near the historic Kirkwood Inn. Ten of the cabins would be open year-round, with the remainder open only in the summer months. The developers are calling the project Kirkwood Station and intend to cater primarily to summer visitors.The project would be located completely in El Dorado County, which would accrue all of the sales, property, and transient occupancy tax benefits while project impacts would fall on Amador and Alpine counties and their residents. It’s the first development proposed in the Kirkwood area north of Highway 88 since Amador and Alpine counties adopted the 2003 Kirkwood Specific Plan. El Dorado County was on track to adopt that plan, but never did so because the county’s general plan was challenged in court.

The project concept got a somewhat neutral reception when introduced at the November 2019 Tri-County Technical Advisory Committee meeting at Kirkwood. While some Kirkwood residents like the concept, we and others raised concerns about increased traffic (already a serious problem there in winter), water quality, scenic views from Highway 88, wildland fire risk, and overuse of local trails and lakes.

Citizens from El Dorado County, Amador County, and beyond raised similar and additional concerns at the project’s pre-application hearing before the El Dorado County Board of Supervisors on February 25. The Kirkwood Lake Cabin Owners’ Association, which was well-represented at the hearing, and the Two Sentinels Girl Scout Camp were concerned about potential adverse water quality and recreational impacts to Kirkwood Lake, the camp, local cabin owners, traffic, and trails. They also noted that the water line that serves the inn and camp is only 2 inches in diameter, insufficient to supply a resort or provide adequate fire flow for commercial buildings. Others were concerned about further urbanization of the Kirkwood-Carson Pass area, the effects on Caples Creek’s wild trout population, and increased recreational use of adjacent national forest lands.

The county supervisors’ concerns focused on traffic, wildland fire safety, maintaining the rural character of the area, aesthetics, employee housing, and providing recreational facilities for young children. The supervisors approved county staff’s recommendation that the project be allowed to submit a full application.

The project will require a subsequent or supplemental environmental impact report, and we will make sure that our members’ and neighbors’ concerns are addressed. We were very involved in the 2003 Kirkwood Specific Plan update and continue to be wary of seeing the Carson Pass area overtaken by the kind of commercial development and overuse that plagues the Lake Tahoe Basin. We are also very concerned about traffic impacts all the way down into the lower foothills in the winter recreation months.

We’ll keep you aware of the proposal’s progress and likely ask you to weigh in as the project moves ahead. If you’d like to help out our Land Use Team on this or other land use issues, please contact Carolyn in our office at 209-223-3508 or send her an e-mail. 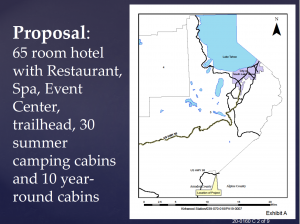