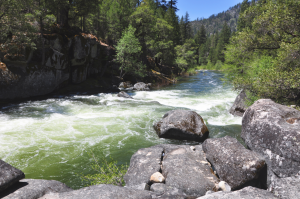 The GreenGen Mokelumne Water Battery Project is a hydropower project with a long history, beginning back in 2008 with the original proposal by PG&E. This “pumped storage” system would pump water from Salt Springs Reservoir into Upper or Lower Bear Reservoir at night while electricity prices are low. The water would then be sent back down a tunnel to generate electricity during the heat of the day when utility prices are high. Generally, pumped storage projects are a net loss of electricity, with most systems consuming 15-30% more electricity than produced.

If that is the case for GreenGen, the project would produce more profits, not more electricity, at great cost to the river ecosystem and surrounding communities.

Since GreenGen LLC, based out of Santa Barbara, revitalized the project, forward progress has been slow. It held a preliminary permit for many years, and only recently completed its draft PAD (pre-application document), which it shared with PG&E and East Bay Municipal Utilities District for comments. Once PG&E and EBMUD provide their comments on the draft PAD, we expect the PAD to be released to the public.

Learn more about the GreenGen proposal, the history of the pumped storage proposal and the Conservancy’s involvement since the beginning by checking out past articles below.

Make sure you are signed up for our eNewsletter to receive updates about the Mokelumne Water Battery Project.

The two reservoirs would be joined by a large tunnel. At night, water would be pumped to the upper reservoir through the tunnel. When power demand peaked during the day, a powerhouse in the tunnel would generate power from water flowing down the tunnel to Salt Springs.

The proposed project was expected to raise and lower the level of Lower Bear Reservoir (if used) and Salt Springs Reservoir up to seven feet a day. Foothill Conservancy and others were concerned that the project would increase water temperatures in the North Fork and main stem Mokelumne River downstream. Related information can be found in this older newsletter article on our website.

GreenGen is calling the pumped-storage project the Mokelumne Water Battery Project because it would act like a battery, storing energy generated by wind and other sources at night. We recently met with part of the project team to share our concerns about the project. Among those concerns is the construction of another high-voltage power line in the Mokelumne River Canyon, considering the number of devastating power-line-related fires in recent years.

We’ll keep you updated as things proceed. Meanwhile, keep an eye out for any public meetings that may be held to discuss the project.

This summer, PG&E announced plans to study several locations in the Sierra, including the North Fork Mokelumne River, as potential sites for pump-storage hydroelectric projects.

Pump-storage projects are old technology consist of two reservoirs with a powerhouse in the middle. The projects drop water through ­hydroelectric generating turbines during the day when power demand is high, then pump it back uphill at night when demand is low. The projects generally use more power than they generate, but they’re profitable and valuable for power companies.

Locally, PG&E has filed preliminary permits with the Federal Energy Regulatory Commission to study a ­possible pump-storage project that would use Salt Springs Reservoir on the lower end and one of the Bear River reservoirs or a new reservoir at Cole Creek on the top. The Cole Creek site is highly sensitive due to a resident population of mountain yellow-legged frogs.

PG&E claims that building this project will help it “store” excess power generated at night by wind turbines, when demand is low. The proposed Mokelumne pump-storage project would generate four times as much power as the existing hydroelectric system on the river.

We’ll be watching this one carefully to make sure the Mokelumne and related resources are not further damaged by additional hydroelectric exploitation.