The Interface Between Hydropower and Climate Change

In the face of climate change, it is extremely important to develop renewable energy sources that use less energy and do not destroy the environment. Hydropower operations currently play a role in our nation’s energy profile, but these systems have high economic and environmental costs and are also vulnerable to the impacts of climate change.

–Changing hydrologic patterns:  Peak runoff periods may change and low flows may extend for longer periods of time. This will make it harder for hydropower systems to capture enough water to efficiently produce energy since they also have to leave enough water to support drinking/irrigation water supplies, river recreation, and aquatic species.

–Extreme weather events: Climate change is causing more frequent and intense weather events such as floods and high winds. These events can damage hydropower facilities and cause erosion that can build up behind the dam until it eventually has too much sediment to operate. Dams can also pose a huge safety risk to the public and the environment during flood events, as evidenced by the Oroville Spillway Disaster that could have killed thousands of people. High heat can also put more strain onto the energy grid as people demand more energy.

–More frequent and intense drought: The occurrence of more frequent and intense drought will make it more difficult for projects to capture and store enough water to operate year-round. Many people do not realize how much energy and water it takes just to operate a hydropower facility.  Hydroelectric operations all over the county are having to shut down or reduce operations because water levels fall too low to flow downstream. 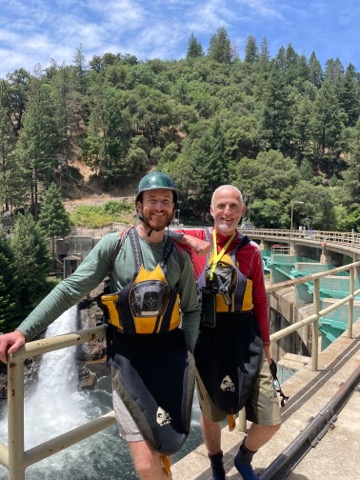 There are activities hydropower developers can undertake to incorporate climate resilience into hydropower project planning, design and operations. It is important that developers estimate the project’s greenhouse gas (GHG) emissions, evaluate other alternatives that produce less impact, and analyze and manage the risks of climate change for the project. The GHG Reservoir (G-Res) Tool provides a cost-effective way of measuring GHG emissions given off by a particular reservoir. This tool can be used to avoid hydropower projects that have high GHG emissions as well as other social and environmental costs.

Instead of developing new hydropower projects, efforts should be made to increase the efficiency of existing projects or add hydropower capacity to existing dams. The National Hydropower Association estimated that the United States could double its hydropower capacity without building any new dams. Projects that don’t require a new dam or dam raise cost less, are less harmful to the environment, and easier to permit than new hydropower projects. It would also be beneficial to remove or replace outdated dams that are no longer functioning as hydropower facilities, but are still impacting the river systems they rely on.

Foothill Conservancy is not against the continued operation of most hydropower projects. In order to create a more reliable future for hydropower the focus should not be on building new dams and diverting more water, but instead should focus on maximizing efficiency of existing projects and managing for the impacts of climate change.