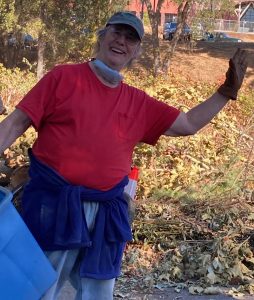 Last December the Foothill Conservancy lost one of our most dedicated and giving volunteers, Ted Gorsuch.  Ted Gorsuch passed away suddenly on December 30, 2021.

I first met Ted in 2020 at a Watershed Protection Alliance (WPA) homeless encampment cleanup we conducted near Mission Street and Clinton Road in Jackson.  As usual, Ted lost no time in getting down in the dirt on this cleanup site, giving it his all to help rid this section of the South Fork of Jackson Creek of garbage. Ted’s enthusiasm to get the job done was boundless. He cared not just about the health of our local environment, but also held a deep compassion for the local homeless we were helping to live more cleanly.

That first cleanup back in 2020 did not scare Ted away from coming back for more and he became a regular participant in our cleanup events, eventually helping us to clean up seven more homeless encampments along creek beds. His work was invaluable, and the funny thing is I think he felt as though we were doing him the favor by asking him for help.

I could always count on Ted for a warm smile and a kind greeting no matter how early in the morning or how miserable the conditions were. I could count on Ted to perform any task we asked of him without complaint and always with that beaming infectious smile of his. He wrestled furniture, mattresses and so much more working side by side with other volunteers to get the job done. Besides cleaning creeks and encampment sites, Ted helped the Foothill Conservancy with Dandelion Days and with our annual dinners. Whenever we asked him for help, Ted did not hesitate to step up.

Ted was a deeply caring man. He was passionate about animal welfare, his family, and his community. He made living in Amador County a bit brighter for everyone he touched. He touched me and I think I can speak for everyone at Foothill Conservancy when I say that he will be deeply missed by us all.

As a way to honor the work and life of Ted, the Foothill Conservancy has established the Ted Gorsuch Memorial Volunteer Award which will be presented every year to our most outstanding volunteer. The award will honor a volunteer who reflects the values Ted lived: a willingness to tackle anything, kindness toward others, and always reaching out a helping hand. We look forward to keeping Ted’s memory alive in this way.

According to WPA volunteer Brian Gray, “Ted was a very willing worker and always had a smile.  He was a very nice guy.”

We miss you Ted!